Most of us learned (in school or by watching School House Rock) that members of Congress dream up solutions to problems in society, introduce them as bills and then struggle to advance those bills through a maze of procedural hurdles to become law. Of course, this civics portrayal of lawmaking vastly oversimplifies the legislative process, but what’s the alternative?

Researchers at the University of Washington’s Center for American Politics and Public Policy are applying data-driven discovery methods popular in the natural sciences to visualize and learn about lawmaking. Legislative Explorer, or LegEx, visually traces the progress bills and resolutions as they move through Congress.

The image below is a spatial representation of the congressional lawmaking process. The left half  represents the U.S. Senate, with senators sorted by party (blue=Democrat) and a proxy for ideology (top=liberal). The House is displayed on the right. Moving in from the borders, the standing committees of the Senate and House are represented, followed by the Senate and House floors. A bill approved by both chambers then moves upward to the President’s desk and into law, while an adopted resolutions (that does not require the president’s signature) moves downward. 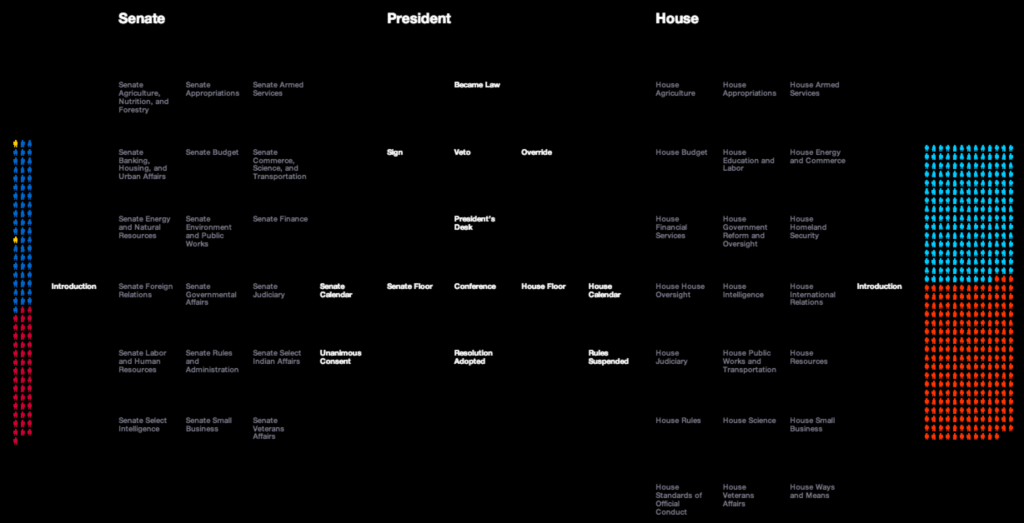 The progress of one important bill, the Dodd-Frank Wall Street Reform and Consumer Protection Act of 2010, is captured in the following animation. The bill (represented by a blue particle) was introduced by House Financial Services Committee chairman Barney Frank (D-MA) on December 2, 2009, and simultaneously referred to several House committees. After passing the House on Dec. 11, it was referred to just one Senate Committee (Banking, Housing and Urban Affairs) chaired by Christopher Dodd (D-CT). The bill was then passed by the Senate on May 20 before ‘ping ponging’ back and forth between the chambers as a conference committee resolved the differences. On July 21 the President signed the bill into law.

The next animation captures the progress of all bills and resolutions introduced in the current 113th Congress (about 8,000 to date).  The different colors of the particles indicates the party and chamber of the bill or resolution’s sponsor. Democrats are blue, Republicans red. Lighter shades of blue and red are bills or resolution sponsored by House members.

Next: Our dysfunctional Congress

Or: check-out LegEx for yourself!